There are two kinds of sports bras: the kind with padded cups and the kind that are stupid.

If there’s no padding, then there’s nippage, and that’s not OK. I don’t think we need, like, Wonderbra-level padding, just something to smooth things out. That’s all I, on behalf of all humanity, ask for. Well, that and one more thing…

Almost every single top or sports bra I have that came with padding, came with REMOVABLE PADDING.

Because I don’t know anyone who would want to

-choose to show their nips to their Crossfit class

-hand wash foam disks, separately from everything else, and then try do the magic origami trick that is necessary to get them back into those stupid little slits and back in the right position.

WHY ARE THEY REMOVABLE? WHAT IN THE EVER LOVING FUCK WITH THAT?

They’re pressed against the sweatiest stinkiest part of your body. They need to be washed. Why not just make them part of the bra, SO WE CAN WASH THEM, without having to search for rogue foam cups beneath the washing machine agitator like they’re rare artifacts in Egypt and we are Indiana Jones in the mother fucking temple of mother fucking doom? 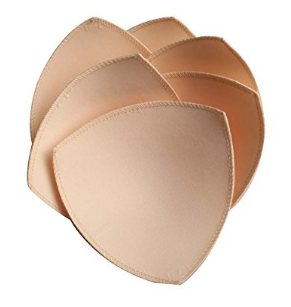 I’m talking about these mother fuckers.

Putting on a jog bra sucks. Taking one off sucks even more. Washing them sucks because you have to use cold water, and special detergent in order to not destroy the spandex, and air dry them, and then when you go to put them on again THOSE STUPID PADS ARE EITHER MISSING, OR THEY’RE FOLDED IN HALF AND HAVE SOMEHOW MIGRATED THROUGH A SECRET INTERNAL TUNNEL IN THE BRA AND ARE NOW IN THE BACK STRAP BY THE CLASP. BY THE CLASP!!!! That’s enough to make me say screw it and not work out, right there.

Then you have to spend ten minutes swearing, and moving them half inch by half inch back into their place, and then unfold them THROUGH THE FABRIC, blindly trying to figure out if the three points are in the the right three corners of the bra.

FOR FUCK’S SAKE. It sucks enough being a woman. SPORTSWEAR COMPANIES, PLEASE. SEW THE CUPS INTO THE BRAS.

JUST SEW THE DAMN CUPS INTO THE BRAS. Removable cups are stupid and pointless.

Just sew the damn cups into the bras. Please.

So I can stop doing this. This is just sad. Fix it.

I am not normal. I am not a person who can do things like:

-have things in the house that taste good

It’s a long story. But the story’s not the point. The point is, for the last few months I’ve been trying being a Ketonian. And failing. And succeeding. And failing some more. But overall, it has made life SO MUCH EASIER because for the first time in my life I’ve stopped thinking about food. And I used to think about food pretty much all of the time. What food I was going to eat, what food I shouldn’t eat, what food other people can eat that I can’t handle, how it sucks not being able to handle normal foods like a normal person, waaaah waaah waaah blah blah blah. But ketosis just muted all of that noise.

How? Why? Being a “Kentonian” means following a ketogenic diet, which isn’t a diet, it’s a strategy of eating that switches your body from carb-fueled to fat-fueled. Why would you want that? 1. Because your brain prefers to run on fat 2. Because it’s a much more steady energy level and 3. You never fucking think about food.

Hey Aimee, isn’t that Atkins? Sort of. But the difference is, in Atkins they’re like “eat all of anything, as long as it’s under a certain amount of carbs.” But we all know deep down that “go nuts and eat all you want”will never work unless the thing you’re going nuts on is greens. FUCK. I know. But hey, eating more oil and good butter is pretty great. You should check it out.

Ketosis is different from Atkins in that it limits your protein. For me, the limit is 20g per meal, which is a totally reasonable serving. And the carb limit is 20g/day, which is like a good salad or two. You don’t eat starchy carbs. You eat more fats. And you’re satiated and can go long long periods of time without thinking about food. And it’s pretty great.

There’s a lot more to it than that, and you can look up all the Keto experts yourself. Maybe start with Dave Asprey and his podcast and the BulletProof Diet book.  If you’re someone like me who has a hard time with the highs and lows and cravings and crashes and binges and food drugs and all of that mess, you should check out Keto. It really simplifies things. Also, I have a friend who’s been doing it pretty much all year and she’s lost 55lbs. Which is awesome. But she tracks. And I’m a lazy undisciplined shit.

Getting into ketosis sucks. That’s true. You do get the carb flu (feel totally run down for a week) and all of that. But once you’re in it, it’s easier to get back into it when you fall out. And you will fall out. Often. I’m out of ketosis right now because I committed the horrendous crime of drinking Coke Zero this week.  Here are some other bullshit little things can throw you out of ketosis: protein bars, sugar free gum, diet pop, too much caffeine, one Goddamn cocktail, looking at a picture of a cupcake…It’s lame. But it’s also not that fucking hard if you actually try, Aimee.

I lost 7 lbs doing Keto this year. Without working out. (Sinus infections.)

But I’ve gained it back because I haven’t been counting my portions and stuff lately. Also, because of all the sinus infections, and antibiotics and steroids I’ve been on to treat the sinus infections, my shit’s a little messed up, and I need to eat more produce for a while. (One word: Microbiome.)

But I’m pro-Keto. I dig it. I dig bulletproof coffee. I dig eating salads with shit-tons of olive oil. I dig brisket. I think I might even like eating fat better than eating cookies now. Because eating fat makes me not think about cookies. And that’s a friggin’ miracle, people. A MIRACLE I SAY!

J. Crew now has a workout wear line, in collaboration with New Balance.

Real talk?  J.Crew having a workout wear line is funny, and don’t think I’m not going to call their shit out for it. There has never been a single muscle on a single female model in all of J.Crew, and the preferred workout program of the waif prep schooler is anorexia/bulimia, not Crossfit or even barre. Maybe her mom went to a barre class once, but she joked the whole time about how she needed a martini to get through it. Yes, I know J.Crew is an aspirational brand that true East Coast Wasp folk with Old Money and Important Art don’t really shop, but I’m a middle class girl from the midwest, so that’s as far as my actual knowledge of/ignorant assumptions about true prep go. 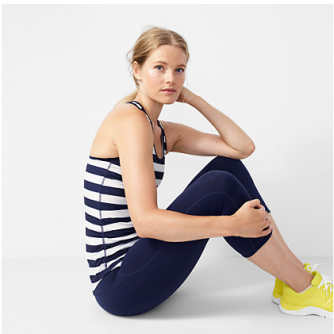 1. Seamless Hoodie 2. Softshell Jacket (Practical, cool, athleisureness.) 3. Perfect Tank Top (Love the thick stripe, perfectly sea-preppy.) 3. Performance Color Block Leggings (Get the blue and orange, not the blue and grey b/c they’ll chop you off and make you look thicker in the thigh.) 4. Polka Dot Running Short (So cute they look like PJs.) 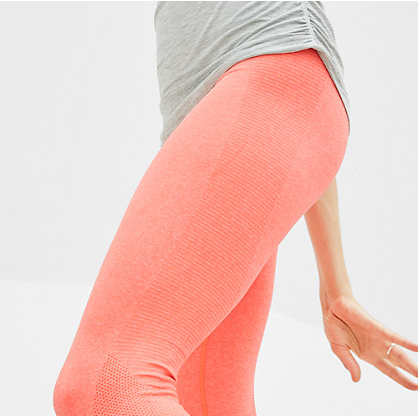 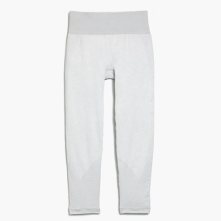 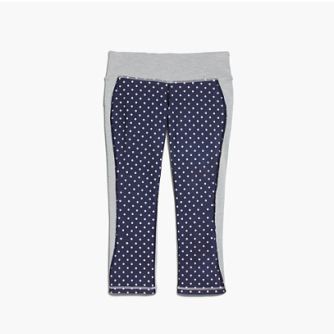 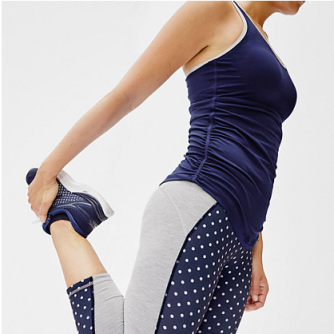 1. Seamless Capri Leggings (pro: they’d be super comfortable. con: they come in three shades of hell no, super unflattering if you have any bumps and also they will show all of the butt sweat.) 2. Performance Capris in Color Block Polka Dot (Light grey? For the back panel? That’s not gonna work. For an-y-body.)

That’s it. I don’t have time to go through it all. Overall: it’s brand-appropriate in style, patterns and colorways. But none of it is anything you can’t find anywhere else. Conclusion: they’ve checked the obligatory “we have a fitness line now” box, it all makes sense for them, but it didn’t push anything, and it’s definitely not a “holy shit did you see what J.Crew did in fitness???” Which is kind of a shame because I think there’s a lot of potential there… I have ideas….call me Jenna. 😉