Here’s what happens when I get dressed for bootcamp: I spend ten minutes trying to figure out which pair of black workout pants is tight enough to stay up during jumping jacks and such, thick enough to camouflage cellulite and sweat, but not so tight that my saggy double butt or lady bits are on full display.

This chart is from YouBeauty, click on it for their butt-type specific exercises.

THEN, I put on whatever flowy top makes me feel least gross and goes down the longest.

THEN, I go to class and either my pants fall down the whole time, or my top flies up during burpees and mountain climbers and hip hikes.

The pants issue, I’ve figured out. I needed to 1. stop wearing Athelta Chaturangas and LuluLemon Wonder Unders to bootcamp, because both of them shits is designed for YOGA. Stretchy material, wide waistbands, basically designed to slip down and give you penguin crotch and muffin top if you dare to jog in place in them.

So I dug out my tub of workout clothes that are a size smaller, and (yippee!) some of those pants fit now. And most of them were intended for running and training, not yoga. So we’re good there. Also: don’t be afraid to wear something that feels “tight” because basically, if it feels “comfy” when you’re not working out, it’s going to fall down when you are. And nobody cares about your butt once the workout starts. Everyone’s busy either worrying about their own butts or trying not to quit and walk out in the middle of class. Just like you. (Want the full education on workout-pant types? I wrote about it here.)

Now the tops: that’s a little harder. You know I loathe clingy, roll-showing, muffin top maxing, tech tops. And I’d rather not wear a wife beater type tank top in public just yet. (mushy middle) So I basically have ONE TOP that really works for boot camp. The Athleta Breathe tank, which has a shit-ton of ruching and is really long, so it stays in place pretty well, but also has some distraction/camo action. Well, they don’t make that tank top anymore. So…sweet.

What about bubble tops, Aimee?  Fuck bubble tops, that’s what. I’m a pear, so they balloon out at the one place I’m small – my waist, and also, because of my shape, they just slide up towards my narrowest part anyway. Also, I think they’re ugly. Unless you’re a super apple. Then, they’re probably your best option.

So I’ve been on the lookout for something that might work, and I sort of found something. It’s called the Sweat it Out top from Lucy. It’s sort of a straight cut, so it is snug-ish at the hip, but doesn’t cling anywhere else. So the cut is working in my favor. But it’s not perfect because the fabric is slippery. It’s better than a lot of tech fabrics because it’s thick (awesome) and seamless and doesn’t look cheap and tacky as fuck. But, it does slide up a little. I even made a point of wearing it with a more brushed cotton type of pant rather than a slippy slidy pair, and I still had to pull it down a fair amount. I will say it never rode all the way up, though. Just a few inches. (PS, they’re on sale now. Probably because you can’t tell the quality from the photograph.) 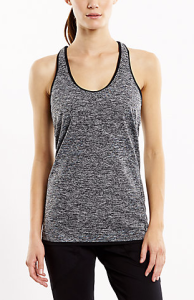 Lucy Sweat it Out Tank

I’ll keep my eyes open. And I might try some other kind of ruched top from Athleta like the Fastest Track or PR Tank 2 or Pure Tank. I don’t know. They look pretty tight-fitting. Might just have to suck it up and wear my Old Navy tank tops. They might not wick or anything, but at least they’re the right shape and they’re not slippery…(FYI, some of the shittier colors of the Fastest Track are on sale for as low as $18…)